DreamForecast (and it’s a doozy)

DreamForecast (and it’s a doozy)

Before we get into today’s DreamForecast, I’m relieved that the “Sister ended comments” linguistics has been fulfilled. Our adorable Sister Rosemarie (who writes me everyday lovely poems, dreams, or analogies) amazingly ceased all comments starting on the day I posted those linguistics. After not hearing from her for a couple of days, I began getting worried that either 1) I’d offended her (or the linguistics offended her), or worse, 2) that something had happened to her. Well, answer B was correct, but she just posted an update in another blog saying:

“Peace, Chris, just a quick note to tell you my computer is down… will get back to you when it is up again.”

For me, the DreamSeer score is a 4.0 or higher. That was truly amazing that her computer went down precisely on the day that the linguistics came out. Absolutely amazing, or was this a practical joke? Either way, it’s great to hear from her again!

Okay, if you’re wanting excitement and intrigue, then you don’t want to miss this DreamForecast. Let’s get right to it and we’ll just go straight to the DreamBot2 phrases:

(We’ll only talk about a few of them)

Water wake reminds me of something tidal. We have several Project August dreams along these lines but no dreams recently to give us any additional specifics. When we hop over the DreamBot3, we notice some interesting location hints: The top 3 US States in our dreams over the past week or so have all been those that are bordered by large bodies of water: Florida, California, and Wisconsin. Hawaii is also on the list, but they are merely a blip at the lower end with only one hit.

With Florida having twice the hits that CA and WI both have, I’m focusing more on Florida. The highest geographical word in DreamBot3 was tied between ‘ocean’ and ‘plains,’ so that doesn’t particularly help us here, except that the ‘ocean’ may rule out Wisconsin. As far as countries go, three of the top 5 countries just happens to be islands: Australia (#1), Japan (#3), and England (#5). China (#2) was no surprise, but Finland made the list above England at #4.

The weather words from DreamBot3 might be somewhat telling, with “clouds” rising to rival “sun” and #1. So, we have a lot of coastal states and countries, the linguists suggests some sort of water wake, and clouds are on the rise.

To me, this suggests a reset of the recent airplane meme. In other words, the emotional release happened, and perhaps we’ll go back to “normal” as far as airplane news goes. Late yesterday was already very telling or confirming of this. I ran the Google searches again, and absolutely no additions were added from yesterday’s stunner.

This was a no-kidding amazing entry…it just stood right out. I suspect that this particular linguistics would not be that difficult to see in a headline, but I included it here anyway. Please look out for this one in your local news…winner goes to the person who submits a headline to match it.

This one is ominous by itself, but when matched up with an actual dream from just before this DreamBot cycle, this might mean that a sinkhole is immanent…with people getting sucked in or trapped in some way. The dream from our database was a Project Uno dream, which means the contestant is trying to dream the biggest headline of a single day, August 1st, 2014.

“Beyond the sink hole to the right was a short black fence, like a guardrail, a strip of grass, maybe a side walk and then a street. In the background to the left were regular leafy trees. At the end of the dream, I became a rescuer myself when I pulled the last man, who was tied to a rope, out of the hole.”

Now, her dream doesn’t give us many clues as to where this sinkhole might occur, but she is from Canada (oh, well that narrows it down doesn’t it?) Florida is by far and away the US state with the most hits on DreamBot3, but we really don’t know yet how the two bots interact, and whether there are any relationships there.

Okay, this one could take a full book to describe. I don’t have that kind of time, so I’ll make it quick. There’s a couple of ways I see this phrase playing out (if it does). First, the sun itself could be going into a severe hibernation cycle, otherwise known as solar minimum. There were several articles to explain this, but the latest was in mid-May 2014. This article says that there’s a possibility of anomalous weather and increased storms as we head toward a Maunder Minimum. So, if we see headlines based off of this, would probably have to come from significant storms, and so therefore the DreamSeer score would automatically be very low.

The other concern I have, or my different slant on the phrase is that the rise of UVB might be more harmful than people realize. “Sun sleeping” in this case means spending too much time out in the sun. However, don’t forget that we need our vitamin D from sun exposure, so just be smart about it, okay?

This may be connected with our number one phrase. To me, this implies some large change in the scenery, perhaps a mudslide near the ocean (that was a Project August dream, by the way). Another example might be another oil leak, and if that happens, you’ll see someone going livid.

First of all, I’m a bit baffled that the word August even appears in the list because Project August dreams are not counted and all “Project August” phrases are removed prior to counting. So we are talking bout a meaningful anomaly. The only other month that comes close is June, but that does have administrative hits in it, so that can be nullified.

‘Satan’ is also very odd, as it rarely makes any more hits than about 1 or 2. This time, a total 16 hits, so a very meaningful jump. I find it odd that “realize” and “control” just happen to be in the same mix of words, because in some circles, “Satan” is all about control.

Some of our Project August dreamers have reported specific and unique dreaming anomalies when they intend to dream about August. One person only gets a black void, while another is never afforded specific details (even though they have detailed dreams all the time otherwise).

So, is total weirdness coming in August? What the heck kind of statement is this anyway? One little detail that I find interesting is that word “somewhere.” This implies that it won’t be “everywhere,” which should be good news for some. Okay, if you have ideas, be sure to include those below.

After all that discussion, I can’t help but provide some assistance from Carl Jung, who said… 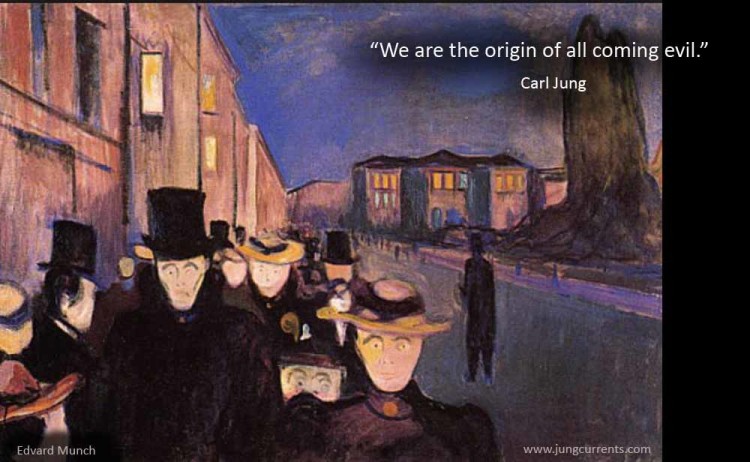 (borrowed from this source)