It’s very refreshing to see many people starting to really evaluate the idea of Paradigm 3. For those who are not familiar with the underlying concepts, you may want to take a second to review the introductory material first.

Just putting together a new paradigm in and of itself does little to improve the world without first establishing structure and rules. There a many readers who have identified the amazing potential that Paradigm 3 offers, but a select few keen observers have also identified the potential ills that could come from a misapplication of the Paradigm 3 principles.

This article acknowledges those concerns by describing some necessary background theory that has gone into this model. Because the explanations are quite long, we’ll only scratch the surface of the bigger issues and worry about applying the rule set in subsequent articles.

The Flow: Next few days

In the coming days, you should expect to see some or all of the following:

1. Specific rulesets for Teams 1 and 2 (these might be embedded into the confidential forums of Paradigm 1 and 2…haven’t decided yet)

2. Specific steps on how to join the groups

4. An application form for people interested in joining either team TO INCLUDE application to become a DreamForecaster!

5. A declaration that Paradigm 3 has started (this will happen last).

Right now, we must cover some really important material for the extremely conscientious folks. This isn’t light, fun reading material, but it is quite essential, especially for the concerned parties wanting to join Team 2 (i.e., the unstoppable creators of Paradigm 3)

There is no requirement to agree with all our philosophies in order to be an effective participant in Paradigm 3. However, we do ask that you at least acknowledge that the following issues are on the table for philosophical consideration. If anything, these issues should inspire you to question just about everything we do.

Most programs would rather you to never question the program content. They want you to think within certain constraints. We, on the other hand, encourage you to think for yourselves. I hope this article does just that. Let’s now look at some of the bigger issues facing Paradigm 3…

The first problem area we face when attempting to force our collective will on the world is the concept of Canceling or Neutralizing the Paradigm 3 model as a whole. When we have one group PREDICTING a tornado and another group that is DISSOLVING tornados, what happens to our statistics on both sides? One side must “win” and thus the other side must “lose.” We create a war inside the NDC forums….we invigorate conflict in the inner drawing room where outer reality is created!

Fortunately, the solution to this conundrum is extremely simple, which involves putting very specific controls and rules on what can and cannot be predicted or created by the two different Paradigm 3 teams. We shall also put rules and controls on how Team Two can formulate their creative headlines. They’ll have strict rules on how much they can change Team One’s predictive headline into a more positive outcome.

For example, creators will most likely be forbidden to affect financial matters. If the dreamers are seeing a market crash, then creators may not step in to prevent that crash. In this specific case, there are several reasons for this rule.

First, if a market crash is due in a purely free market and we effectively stop the downturn, then the normal cycles of this market are stunted, and an even bigger crash would ensue at a later time. I don’t like the examples of financial markets because I’m not a fan of this largely manipulated monstrosity of a social experiment to begin with.

The other reason we avoid finagling with financial issues is because every transaction has two parties or sides. If the market is dropping like a rock, not everyone is losing money. In order to even trade a stock, you need a buyer and a seller. If the sellers suspect that the market is going to crash, they can make a ton of money on the way down. If we attempt to create an outcome here, we are in essence picking sides, and picking sides is something that the NDC vehemently attempts to avoid.

Each person is granted the free will to pursue a worthwhile existence as long as they don’t infringe on other peoples’ pursuit. Paradigm 2 folks will be constantly living at the razor’s edge of reality creation. Where does one person’s free will end and the other begin?

When we step back from our work as creators and look at all the big agendas out there all vying for their version of reality, it might look like a series of bubbles like Figure 1 below. There are an infinite amount of bubbles out there…this great big goo of varying sizes of islands all attempting to create the world they want to see. Some bubbles overlap, and others are completely enveloped in someone else’s influence. 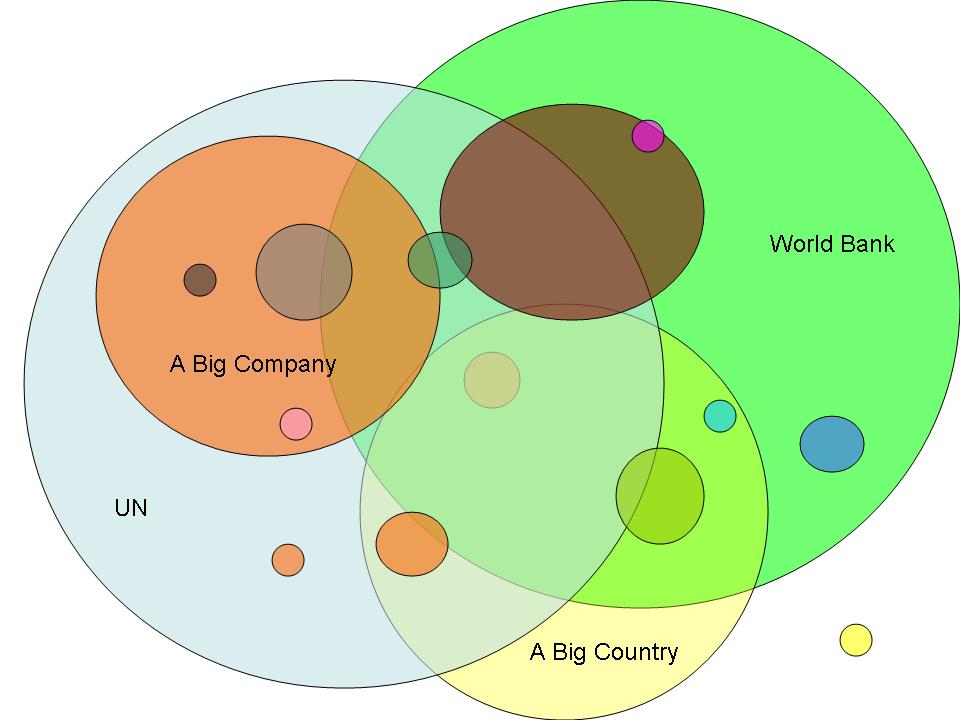 Obviously, the World Bank and the UN are but just two examples in a vast network of intertwining agendas. Even at the very top of the chain, the agenda isn’t completely congruent. In other words, no matter what anyone says about the “powers that be” (TPTB), there is no one single, all-encompassing circle. Even TPTB have several overlapping spheres instead of just one huge, individual sphere that controls everything.

We can use Figure 1 as an example here. Some people would argue that the circles of World Bank and the UN are but one single gargantuan sphere of influence, but that is debatable, nor is the focus of this article.

Lastly, notice the tiny yellow circle that all by itself in the lower right of Figure 1. I’m not completely convinced that this entity even exists or CAN exist. As much as some people want to stay completely isolated, their thoughts and emotions do get collected into the bigger context. This begs the question: where and how big is the NDC Paradigm 2 bubble? Answer: Unknown. This will constantly be measured during daily and weekly DreamBot runs.

Some people might object to Paradigm 3 due to the concept of a higher law called Cause and Effect, or in some circles…Reaping & Sowing and/or Karma. Every action produces a reaction. What you sow, so shall you reap. Such is this higher law, and it is not always referring to negative consequences. Positive consequences are just as likely and guaranteed.

What if the NDC has stumbled upon a mechanism to affect or override this phenomenon? Would it be wise to carry through with such a mechanism? I’ll try to quickly negate this notion as succinctly as possible.

First off, if the Law of Cause and Effect is purely Universal, then this is one definite example of an “uncontrollable force.” So, even if we can dissolve a tornado effectively, which prevents Mr. BillyBob from losing his house based on karmic retribution (a clumsy example, I know), karma WILL find another mechanism to do it’s work. And if Team 2 dissolves the next catastrophe, then karma will find yet another mechanism.

I contend, however, that if karma is indeed real, then it works at a much higher level. More specifically, if the Law of Cause and Effect targets Mr. BillyBob’s house, then it will not show up on our radar scope to begin with. We’ll never know that a tornado is inbound. We will have no warnings for the karmic tornado coming towards BillyBob.

The theory here is critical because it suggests that Paradigm 2 folks will always be alleviated from the burden of preserving karmic energy, otherwise known as “playing God.” This is critical in application because if we’re right, then when a warning comes in from the Paradigm 1 Seers, then automatically we know that karmic energy is NOT at play and thus the catastrophe may be freely dissolved by the Paradigm 2 team without worry or concern of “pretending to be God” (i.e., burdened with deciding whether to save something or allow the destruction to happen.) They need not worry about whether saving something is going to prevent karmic necessities.

In other words, if karma is indeed required by an event, then NDC’s Paradigm 3 people will simply never see it coming. It will just happen exactly when it is supposed to happen.

On the flip side, what if it was karma itself that actually sends the materialistic warning to Paradigm 1 dreamers? How paradoxical is this? It was through karmic channels that not only allowed the warning, but encouraged the dissolving of the tornado?

In short, higher laws are immutable and thus are beyond the requirement of our purview. In general (at least during this particular phase in Human experience), karma is not something that humans are responsible for nor can even affect or touch. Thus, whatever warnings come into the collective unconscious will be fair game for Paradigm 2’s creative power. No karmic strings attached.

I hope these underlying theories have stirred some serious inquiry in the readers’ minds. Paradigm 3 is MUCH more involved that simply picking some terrible predictions and petitioning a higher power to deal with those issues. The overall concept is correct, but the simplification diverts us from the real issues.

In the coming days, I’ll be finally putting pen to paper and outlining the rule sets for Paradigm 3 that have been churning for months in my head. When we talk about concepts like ‘free will,’ ‘reaping/sowing (karma),’ and even ‘shooting ourselves in the foot,’ its not hard to see that Paradigm 3 MUST be treated very seriously, and everything must be laid out in advance before the operations kick off.

Therefore, what I’ll be working on in the coming days (other than DreamBot runs, potential headlines, finalizing Proj Aug, preparing for two upcoming radio shows, etc.) is setting up these all-important Paradigm 3 rule sets.

I welcome enthusiasm and anticipation, but just realize that I also need your patience. As we walk through the door into the next paradigm, we must do so with careful vigilance and structured frameworks. Those are forthcoming….I promise!