If you have little time, please go straight to the end for summaries, headline prediction, and TO DO item. FIRST, on your way through to the bottom, ensure you specifically read the NDC First Axiom!

I apologize for typos in advance…this was my fastest writing/publishing to date.

I have never seen so many big and varying memes coming together all at once. Significant dream symbols and surging DreamBot words all dancing around as if the pot is just starting to boil. It feels as if something is about to rupture. Are the meme overlaps indicating that the fabric of reality is tearing…thin from wear? Is the glitch in the manipulated mass consciousness about to rupture?

Or do we take these memes more literally? We have significant data to support both sides, and so as you read the supporting documentation with an open and discerning mind, you decide where humanity is going with all this. With the clear archetypes coming together in a fantastic display of shattering convergence, I can’t tell you which one will win out.

I’ve taken my best shot in the initial headline below. The answer could easily be “all of the above,” but for the first time, I do think that “none of the above” is off the table.

First up, Daily DreamBot run indicates that “THEY” have won the battle for the collective mind. It doesn’t matter who you think the source of this manipulation is…whether it’s simply us “seeing the future,” mass media programming us to create a terrible future, US remembering 9/11, maybe a perceived real enemy wanting to destroy us, or even perhaps satan or some other off-worlder manipulating the mass dreams.

From a prediction standpoint, it doesn’t matter WHY the dreamers are dreaming these surging memes! Statistically speaking, whether we’re reading what’s coming or creating this ourselves, it appears dreadful what is coming. Is there any shred of good news here? YES.

One significant observation that we’ve picked up throughout our work in Project August that doesn’t have clear statistics associated with it, is this:

*** First NDC Forecasting Axiom: Most big memes come true accurately, but their level of severity are less pronounced than what the headline suggested. ***

How much less pronounced? That’s why we don’t have statistics for this axiom.

Just about every single meme that we’ve explored and warned about (>90%) have come to pass, but their severity (in terms of loss of life, destruction level, etc.) are less severe than what we “saw” in the predictive source material. There are many brilliant hypotheses about why this might be, but we’ll cover that when we have time later.

*** Vital Point is to read the following material knowing that there is roughly a 90% chance of at least some of this will come to pass, but when it does, it will be some degree less catastrophic than what it appears here. Okay? Okay…

Let’s get into the meat now.

Going chronologically, we have yesterday’s “Holy DreamBot” run, which had some mysterious religious words showing up with the biggest surges to date (“Monk” receiving a whopping 5,800% massive move, and “Buddhist” and “Catholic” all making almost as big a move).

Also yesterday was the USA making a huge 1,500% move upward to intermingle into the unprecedented religious-word meme.

Early this morning, we received a couple of dream overlaps, for yesterday’s run, and I’ll have to confirm with the dreamer, but since I did not send out a warning for yesterday’s DreamBot list, I assume Spencer’s dream was not due to him reading yesterday’s list.

Either way (although to a lesser degree if it was day residue), we have lingo & dreams overlapping to a significant degree. We have now these major trends: Religion, USA, Collapse, Death, MATES. Let me explain.

DreamBot4, which is what the Daily DreamBot is, is very good at big, non-precise pictures. So, to have varying types of religions in a single DreamBot run is quite significant, but the fact that they are all surging faster than what normally surging words do….that is also significant.

So what about religion?

The ancient buildings throughout the city (including this church) were all in disrepair.  All of the wood framed portions of all the structures in this part of town were about to collapse in any moment or day or so.  Everything was falling apart like the wood was barely staying up.

Only had a few more days before it would all collapse and fall down.

Literal timing here indicates that mere days are left for metaphoric collapse of both cities (governments?) and churches (religions?)

On the very same night, we have a second dreamer who actually has some proven precognitive skills input her recent dreams in the same category of “collapse.”

AwakenedDreamer says this in her recent dream sequence:

This could be either an event in 4-5 days, weeks,  or around the turn of autumn equinox. Has something to do with a crash (economic, political, or vessel).

She clearly sees a collapse of some kind, but she also sees something birthing in its wake. See her dream for more details, but the last snippet is…

The village chief and last night the mayor/governor/CEO was not allowed entrance into the ceremony, only the humble that represented the common man/woman.The common workers were all in charge of manufacturing/distributing the new technology. All is on a level playing field. No lack. Like in a John Galt world; Atlas finally shrugged!

Note: her dream does also forecast a new technology!

First up, we’re still technically in that bell curve window for Project August, and Headline #71 was about a much bigger meme of the death of either religion or dogma or both, and that meme might be accelerating although there has been more headline on this issue that we can even keep up with.

Interestingly, we don’t even need Project August here to substantiate the overlap because we have new dream material to reinvigorate the death or dying meme.

Welcome to today’s DreamBot4 (see the full list in the forum):

Death has been common in recent DreamBase dreams and elsewhere:

1. “There is no food here; people have been starving to death.”

2. “Death was EVERYWHERE.” (note: this was dreamed “a long time ago” but as we saw with other dreams, it’s still relevant that they decided to input it NOW).

3. “she is going to disappear and be killed and she is right.”

5. Grady at Nostracoedus summarizes his Sept 4 bot run like this “ISIS Border Terrorist may strike a Southern Part of Dallas Security.  There is a Houston Threat. People will be going to War.”

We recently poked fun at mass media for instilling fear the collective minds. But can the readers now see just how important this collective dream project really is?

It serves as a barometer for how well the propaganda machine is working! We don’t even need to be predictive in nature on this…we can simply see what the collective dreamers have been programmed with and then send that over to the Paradigm 2 team to work on.

Note: “P2” is the team in Paradigm 3 that will help deprogram humanity from mass manipulation through prayer, meditation, intention, etc. To learn more or apply for this revolutionary project that is coming soon, click here.

With all that said, today’s DreamBot4 says that humanity is obsessing about terror, doom, and a VERY unlikely dream word: Mayhem.

It also seems to suggest that Heart is Doomed, or Hearts are Useless, or Squads are going to be Useless, or Squads will be Useless against the Protests, or Protests Useless. Note that TOWER is once again surging. I suspect this is simply day residue from 9/11 memories and may have nothing to do with future reality, but it IS something to consider.

First, here’s a nice summary of the big memes and how they stack up: 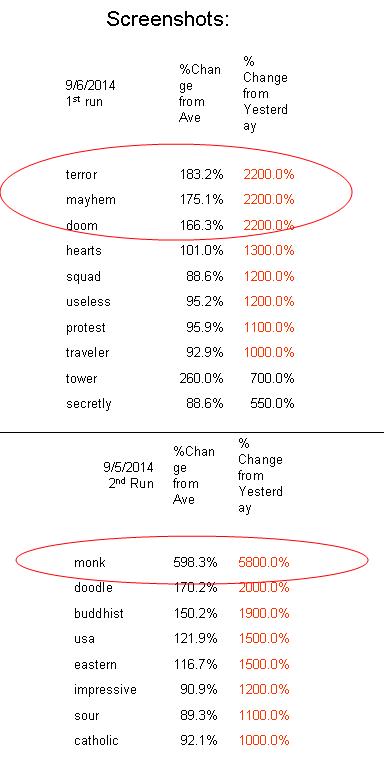 See something missing in all that? Location!

Due to time constraints, I’ve left DreamBot3 alone recently, but we need it now to uncover possible location markers. Remember that we only have a few datapoints about connecting big memes with our DreamBot3 locations, but there is an iffy connection so far, especially if we have DreamBase dreams to back it up (which we don’t this time, which could be good or bad, not sure which).

Cut to the chase of what we found, here’s a summary of all the locations:

– DreamBot4 suggests somewhere in the USA

– One dreamer says, “Not necessarily in the US”

– Another dream suggests USA is likely, but might be North America, possibly Canada, especially for religious-related memes.

– Also mentioned is India and Panama, although neither are direct references to big events

WHAT: Might be the biggest question so far because of all the HUGE memes. Is it all connected in some way? Religion, Terror, Death, Mayhem, Collapse, MATES (roommate, classmate, sex, etc.)? Note, MATE might overlap with #2 Australia above!

WHERE: USA is clearly the highest probability, but Australia is high. If the US, then Phoenix MIGHT be first, but some Texas city is HIGHLY likely based on considerable older dream overlap and Grady’s Nostracodues program (Dallas and Houston the two highest probabilities).

WHEN: Between now and end of September. If we make it through September, we MUST update the dream material to refresh the details herein.

INITIAL Headline: Religious-related terror attempts to collapse governmental, religious, and or educational centers in Dallas and Houston on September 15, 2014 (date marker is simply the midpoint of several different markers). “Terror” might take the form of mass shooting, collapse of buildings, or hostage situation.

However, note that the details are the most accurate within 1 week time, so if something kicks off soon statistically speaking, it will look the most similar to this headline.