For those with eyes to see: Secret mirror to Wall St.

For those with eyes to see: Secret mirror to Wall St.

Ingredients that went into this recipe include: 1 part utter shock, 1 part synchronicity, 1 part scientific research and 1 part otherly world. In addition, there are other overarching seasonings, including a sprinkle of equality, a drizzle of hope, and one gigantic heaping ladle of gratitude.

I start off with what could be the best news of all….This series of articles will be not be recognized in mainstream finance, primarily because this article is written for people who value dreams. Nonetheless, this information does have the potential to change how all of us views reality and reality creation.

Note: if you struggle with economic stuff, or are disgusted with, or just don’t care at all about all things economic, then please give this your best shot. I promise that regardless your orientation to economic matters and dream research, this one could very well be one of the most important series of posts in modern times.

Very generally speaking (and of course this isn’t true in all cases, but…) the more a person values dreams, the less interest they have in making it big on Wall St. Yes, there are exceptions, but we can find a heavier concentration of meek people in dream circles than we can find in stock-picking circles and market exchanges.

All throughout the history of the stock markets, corrupt and honest people alike have been trying to figure out algorithms to best match what will happen in the markets from day-to-day and week-to-week. In theory, if you know which way the market is going, you know how to place your bets, thereby making more money, or at least reducing your chances of losing money.

Historically, some of the best stock pickers have made a lot of money on just barely exceeding a 50% success rate on their stock-picking track records. If they win more than they lose, theoretically, they should come out ahead. Many experts look at many different factors when trying to decide which way the market will go. In order to determine this, they might look at the federal funds rate, consumer confidence, rolling index averages, the price of certain commodities (e.g., gold, oil, corn, etc.), certain companies’ balance sheets, and so much more.

For example, some people might look at the dollar index, which is basically how the world perceives the value of the dollar based on other criteria. The theory is that if they know where the dollar is going (whether up or down), then they’ll know whether the market is going up or down. Thus, the two are correlated, and that value of correlation between the dollar index and the Dow Jones Industrial Average (DJIA), which is the gold standard by which just about every Tom, Dick, and Harry assesses the greater economy, is 0.35. Here’s a better description of what I just said:

“The Dow Jones Industrial Average is a price-weighted average of 30 significant stocks traded on the New York Stock Exchange and the Nasdaq. The DJIA was invented by Charles Dow back in 1896.” http://www.investopedia.com/terms/d/djia.asp

Note that just because Tom, Dick, and Harry all look at the DJIA to gauge the condition of the economy doesn’t mean its right to do so. Personally, I can’t stand the DJIA, and many economists might say the same thing. We’re currently at record highs on that index, and yet more young people have stopped looking for jobs.

The system is corrupt to the core and there is market manipulation happening, which is even acknowledged by the mainstream. So why are even talking about the DJIA? Because no matter the level of manipulation, no matter the corruption, no matter the new Fed policies, no matter Washington’s attempts at saving the system through fiscal policy (yawn), dreams can see through the smokescreen, and it just so happens that the DJIA is what it apparently sees best! We’ll get to all that in a minute.

A Return to Correlation

The best correlations can be easily seen between indexes, like the DJIA and the S&P 500. That correlation is well above 0.9, meaning that when one goes up a certain percentage, the other invariably goes up a very similar percentage amount.

However, there’s a big whopping “who cares” in here because of several items that the mainstream stock pickers don’t seem to want to tell the meek people or those just learning the trade. That is, who cares if they are correlated at all? As the dollar strengthens, the market increases? Who cares? In order to make this trade successful, you will have to guess at where the dollar is going.

Another example: Since the DJIA is so highly correlated with the S&P 500, if I know where the S&P 500 is going, then I’ll know almost guaranteed where the DJIA is headed, and I can choose to place a trade on both of them! Hey make double the money!!

Ooops, almost forgot…WHO CARES?! How the heck are you going to figure out where the S&P 500 is going to begin with? The correlation between the two is super high, but it doesn’t get us anywhere. One doesn’t predict the other. The two indexes move together, which isn’t very helpful for a trader who’s trying to determine whether the markets are going up or down in the future.

In order to make a better trade today, you don’t want a correlation value that is concurrent with today’s numbers. You’d rather have something that’s correlated to the DJIA for SOME TIME IN THE FUTURE. Let’s look at an example, and this is purely hypothetical, in order to illustrate the point here. 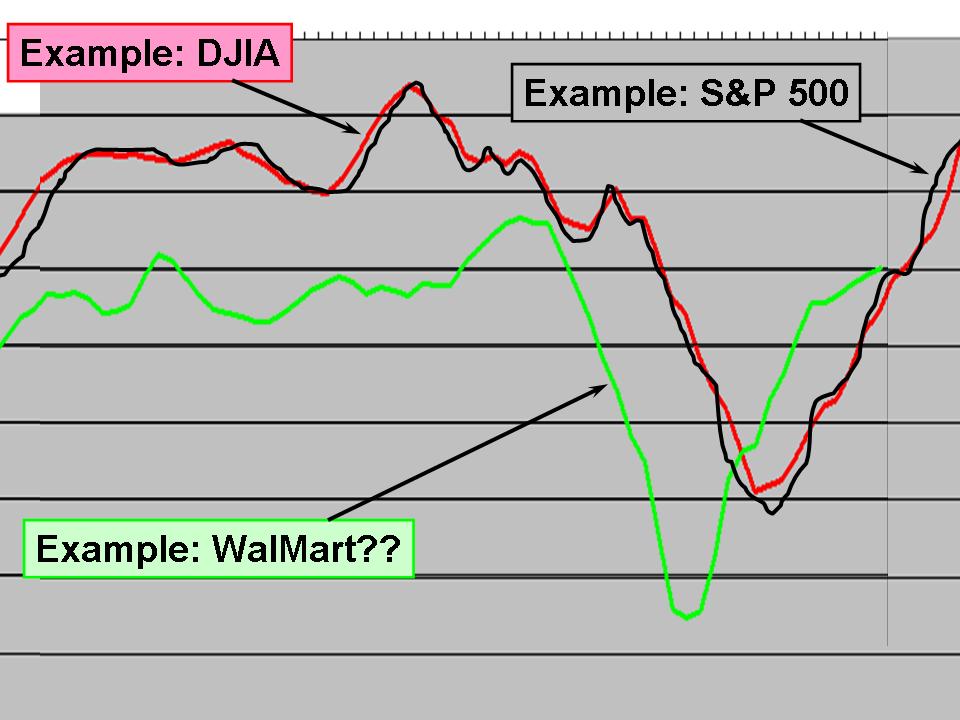 Okay, the green line is just some random company, and for simplicity sake, let’s just say it’s Walmart. The red line is the gold standard for stock index numbers, the DJIA. The black line represents a hypothetical trace of the S&P 500.

Notice that the red and black lines look almost identical, with just some slight variance. However, look at the green line. It isn’t exact, but the green line does tend to LEAD the DJIA and the S&P 500. In our example, when Walmart plummeted, the DJIA plummeted, too, just days later.

Therefore, yes, the GREEN line is predictive, and although it is not perfect, it does seem to capture what the red line and black line are going to do.

All we have to do, then…

Simple enough, right? Just find a company like our walmart example and place bets on where you see it go. If it’s correlated high enough, you be relatively confident that when your predictive company goes up, the DJIA will go up shortly thereafter, and you load up on stocks in the DJIA.

Just one minor problem: that type of company in our example doesn’t exist. In general, if the company’s chart pattern is correlated to the bigger DJIA, it will almost always be correlated with zero time difference. Thus, there is no actual green line company in existence.

This is exactly what the big wigs at Wall Street, the hedge funds, the big investment banks are all doing….trying to find that that golden line that has a high correlation to the FUTURE stock prices. There are technical traders, fundamental traders, stock screeners, and many other forms of dart throwing out there.

In the real world, if someone finds an algorithm that exceeds 60% reliability to future market trends, then they are doing pretty good, but if they are able to find something above 70% success rate, that is rare and the person is really doing well, especially if the screening program continues to hold true over time (which it rarely does).

But what if there was a predictive line out there that:

– is much greater than 70% reliable at predicting major market trends

– has an event horizon of days and weeks (selectable)

– and is powered by dreams…

Too far fetched? Wouldn’t this be called a utopian fantasy? And aren’t utopias just a figment of our imagination? And aren’t dreams just total hogwash, especially when it comes to predicting things?

Well, then, how about I just give you the data, and you can either believe or not believe? Alright, we’ll do just that in the next installment. By the way, it is our work here that George Ure was attempting to articulate in one of his articles last week, when the NDC was highlighted over there at Urbabsurvival.com.

“Blessed Are the Meek…

…for they shall inherit the Earth….”