When it rains in the collective unconscious, it POURS! It’s almost overwhelming seeing all these big surging memes coming in all at once. Where shall we start?

Wrinkle is probably the best place as any since this defies logic, historical data, and everything else we’ve come to know at the Dream Center. “Wrinkle” goes about 2 months without being dreamed by the collective dreamers, and on the night of the October 9/10, 2014, KABOOM….all of a sudden it has almost 100 hits in the dreams.

The alarm bells are sounding for this huge surging word, but interpretations so far are all over the map. Therefore, it’s a waiting game and a P1 game, for whoever wants to participate.

Either way, today’s DreamBot run is worth your inspection and comments. We have several new linguistics phrases that match up very closely with recent dreams. Link: http://nationaldreamcenter.com/forum18/showthread.php?tid=144 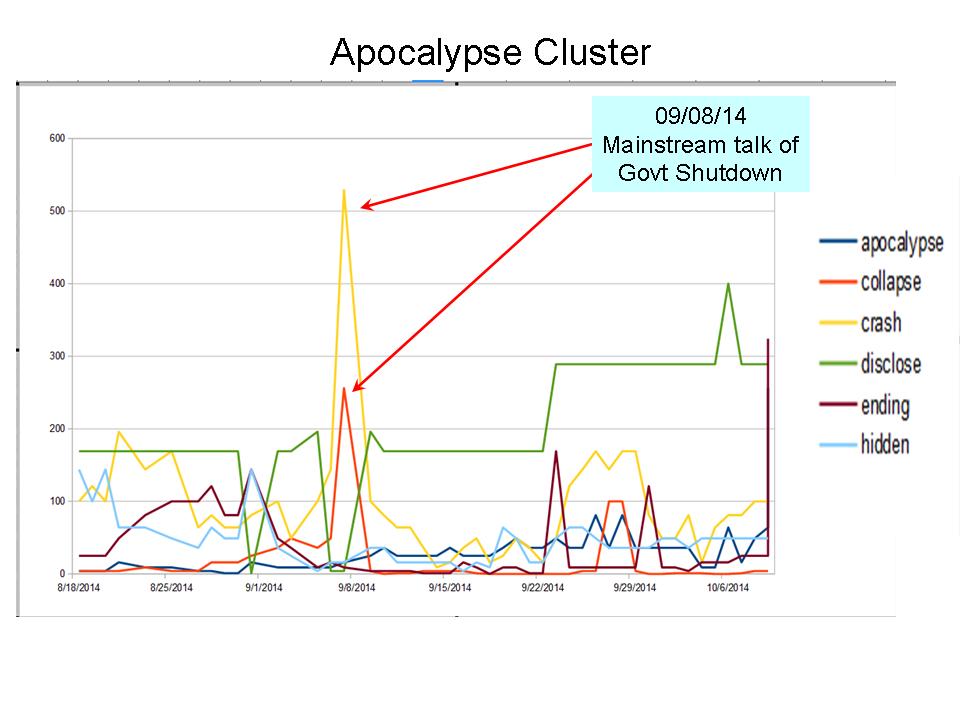 The chart that we present here says quite a bit about where the collective unconscious has been in the last 2 months or so. It does seem that whenever “Collapse” increases, then “Crash” also increases. They appear to be positively correlated but we would really like to know WHY the lines are doing what they’re doing.

For example, it just so happens that on September 8, 2014, that mainstream media was enamored with Congress headed for a budget problem, equating to a possible government shutdown. As an aside, is the media ever going to learn that the federal government never shuts down due to budget problems?

News from September 8th to support this connection:

Anyway, so is the spike in the “Crash” and “Collapse” simply due to mainstream fear mongering, or is it predictive of a later crash (or could it be both?)

All this is happening on the same day…10/10/14: 1) DreamBot4 linguistics, 2) specific dream content from our statistically most-successful dreamer, and 3) a curious announcement by JP Morgan’s top dog.

First: linguistics. The daily DreamBot4’s 2nd grouping had “Crash” and “Ending” in just one linguistics group, but the whole run includes “Wrinkle” SURGING 10K% and “Apocalypse” growing 100%. We might call this whole run, “The Apocalypse Run.”

Second: dream content. On the same morning, we have NativeAmericanDreamWeaver supply a crash/collapse dream: http://www.nationaldreamcenter.com/dreamdb/dreambase_2_0/2706_Inverted_City_Citi_Unregulated_Markets

She has specific headlines for her dream, and they range from market collapse to Citi Bank collapsing to markets collapsing due to unregulated issues.

Third: mainstream announcement. AND now we have Jamie Daimon make it into headline news at 11:30 EST today announcing his incessant fear about ….can you guess it?….Unregulated Banks, which is exactly what NADW dreamt earlier that morning! Can’t make this stuff up.

Dimon: Shadow banking threat to US economy (note that CNBC has changed the headline to “Dimon: ‘I’m a real long-term bull’ on US economy‘”

“he sees one thing that could derail the recovery: The $3.2 trillion ($15 trillion globally) nonbank financial system, or “shadow banks.”

“However, asked what keeps him up at night, he said nonbank lending poses a danger “because no one is paying attention to it.” He said the system is “huge” and “growing.”

Under the Problem-Crisis-Solution model, it would appear that we’re being set up for new regulation that will protect the big burly bully banks while collapsing the new “renegade” banks that don’t deal in Federal Reserve Notes. In my research of possible new economies, there are many such banks, and although they are small now, THESE, my friends are exactly what Jamie and team are truly worried about. The empire is threatened! (TPTB are threatened)…thus new regulations coming, and my guess is that CitiBank will pose as the big victim.

Remember how dream material in our models tend to be very accurate but exaggerated. In other words, the predictions come true, but the kill ratios are less, the destruction is less…everything so far comes out less severe than predicted.

So, based on all that, I expect a mini-crisis at CitiBank (or any other big Federal Reserve bank) that will raise significant concern and give the power brokers the opportunity to pass regulation that will cripple the so-called “shadow banks.” That’s my take on it, but NativeAmericanDreamWeaver might have more words in her new Headline thread: http://nationaldreamcenter.com/forum18/forumdisplay.php?fid=3 (only those registered in the forums will have access to DreamForecaster headlines)

The last huge meme that came to a climax this morning, has to do with a really bad teacher/professor who may be a killer or child molester (or both). Get this…two dreams back to back in the DreamBase (by two different dreamers) discuss a terrible teacher who molests kids and/or kills students, AND THE NAME IN BOTH DREAMS WAS MIKE!! This absolutely uncanny, but even this isn’t all!

In the linguistics, we’ve had “Professor” “Classmates” “Prof” and more all accelerating in the past week. Here’s what I’m personally working on with reference to a teacher/professor Mike:

Dream 1: 10/10/14 “Coach/teacher is a killer like Charles Manson”  http://www.nationaldreamcenter.com/dreamdb/dreambase_2_0/2705_Coach_teacher_is_a_killer_like_Charles_Manson

“Teacher or Coach to high school aged teen boys, a man in a position of power, he does things with these young boys which is illegal”  “I am there with Mike”

10/10/14 “In this dream state, Michael was heavy with guilt over the consequences of his earthly actions.” “Michael and I were not friends, just classmates.” “Michael K. had been arrested in 2007 under the suspicion of pedophilia, as a teacher at my former high school”

I published my headline at the following link, which includes more descriptions about this predicted California teacher named Mike: http://nationaldreamcenter.com/forum18/showthread.php?tid=148 (only guests who are registered in the forum may view all the headlines).