It would be at the end of September, right in the heart of some very troubling times at the NDC (amidst attacks, database crashes, and scheduled forum closures) that “BARRY” would be starting an alarming seesaw pattern in the collective psyche. We began seeing this pattern in early October and began questioning, “Who in the heck is Barry?”

Now that we have news to positively correlate with Barry’s DreamBot appearances, we can look back on the historical data and say, “Oh my gosh…DreamBot definitely saw this one for sure!” So with that, let’s get started.

Timeline and News for ‘Barry’

Sep 25: “Barry” skyrockets from near zero for the first time (this would be 19 days ahead of big news).

Sep 28: After crashing to zero again on Sep 27, Barry shoots up once again

Oct 5: Barry disappears again until Oct 5, and then shoots up even higher synonymously with linguistics words “Embarrassing” and “Temple.” Notice that the grouping of words is laid out to where I say, “This group feels like Barry is about to get discovered, and it will be embarrassing.”

Also notice how this surge is higher than the previous spike. The closer we get to the news, the bigger the impulse or consciousness wave, perhaps?

Oct 7: Barry and Temple become highly & positively correlated, meaning they seesaw in harmony (we’ll examine this later in the graph). I mention that, “Other than Dallas, I don’t think there has been any other word as persistent as Barry. How many times have we seen that name now? Is it just a general meme, or is Barry Soetoro going down? Day residue or predictive? Unknown, but I don’t think day residue has this kind of persistence.”

Note that I suspect Barry Soetoro for the eventual news, and that was obviously incorrect, but how ironic that the eventual Barry would be in the same CITY as the aforementioned (i.e., Washington DC)?

Oct 12: Last surge in Barry and Temple before the real Barry goes down…

Is this big news? Oh indeed.

Uniformed police officers and plainclothes detectives swarmed the Georgetown home of Rabbi Barry Freundel, the senior rabbi at Washington, DC’s Kesher Israel synagogue, this morning. Freundel was reportedly taken away in handcuffs by the Metropolitan Police, who also took computers and other items from the residence.

Treasury Secretary Jack Lew and former senator Joe Lieberman are among the many influential members of the Kesher Israel congregation, which Freundel has headed since 1989.

A police report, obtained by local D.C. news channel Fox 5, alleges that Freundel was seen installing a camera hidden in a clock radio above a shower at the mikvah. Freundel allegedly told the person who caught him that he was fixing the shower ventilation.

For those who don’t know, a Mikvah is, “a bath filled with water that comes from a natural source.”

in a typical set-up, worshippers will enter a prep room, perhaps containing toothpaste, q-tips, and a shower, before the mikveh. The idea is to be naked and rinse one’s body of all dirt so that nothing comes in between the person and the mikveh. The person is then led into the mikveh room by a person from the temple.

“This is a painful moment for Kesher Israel congregation and the entire Jewish community. At this challenging time, we draw strength from our faith, our tradition, and our fellow congregants.”

And now for the Big Chart

Since the real Barry incident does appear to be quite embarrassing and since ‘Barry’ and ‘Embarrassing’ showed up together on Oct 5th, I decided to map out all the hits and see if there might be any correlation in the data sets. It turns out that there was, but not nearly as interesting as the correlation between “Barry” and “Temple.” 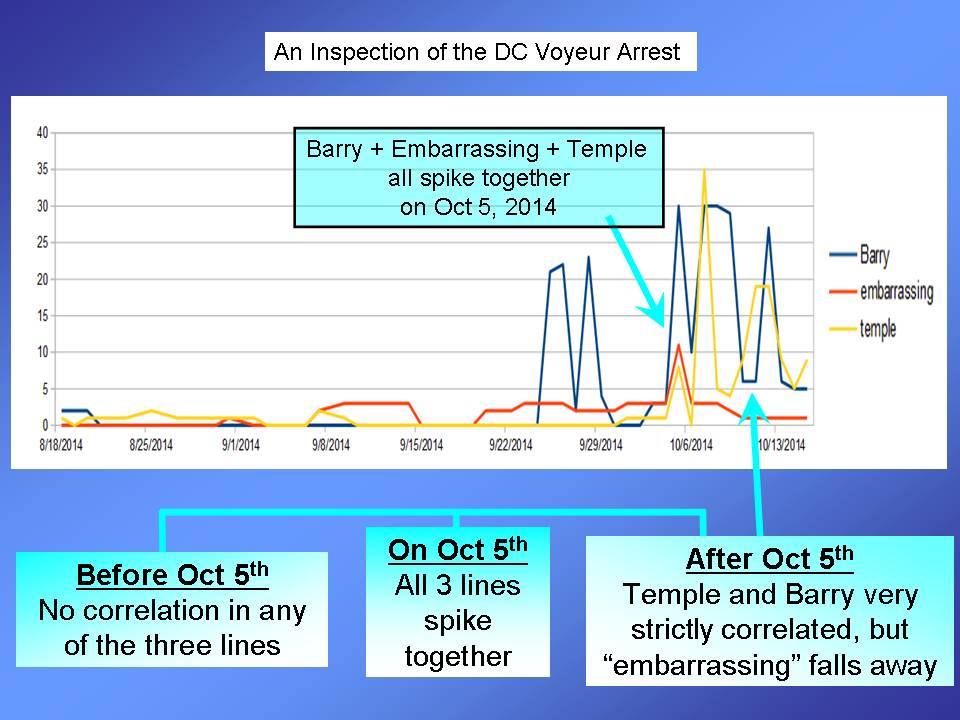 As can be seen by the three colored lines, they all seem to be doing their own thing (i.e. random) prior to Oct 5th. However, right on the 5th, all three spike to their respective (up to that point) all-time highs. On this day, we are exactly 9 days from the arrest.

Then after the synchronous triple spike on the 5th, “Embarrassing” falls back to zero and “Temple” seems to be joined at the hip (i.e., positively correlated) with “Barry” from then on. In fact, the two lines almost look close to overlapping one another. It’s rather uncanny.

Therefore, we see total disharmony in the lines prior to the 5th and then suddenly “Barry” and “Temple” act as if they are they the same word!

On the Oct 5th DreamBot run (the 5th clearly being the pivotal day in this expose) we actually created a grouping that included “Barry” and “Suspect” and “Embarrassing.” The actual phrase was, “Retreat Barry monsters consider thanks suspect embarrassing.”

In hindsight, this phrase makes a lot of sense. We have a Rabbi monster (quite literally I might add) who becomes an embarrassed suspect and everyone becomes grateful since the monster is now in handcuffs. However, to see this ahead of time is quite challenging to say the least. Therefore, the solution to this scenario in the future will be to:

b. Step back to the first day of correlation and analyze the DreamBot4 phrasings.

How easier could it be? Whoever agrees with my word “easier” can go ahead and develop my correlation warning algorithm for me!

This graph and analysis truly is monumental in a lot of ways. If nothing else, does everyone at least agree that the collective unconscious can see big events ahead of time? But the fact is, through this news sequence, we were able to quite literally stumble upon an incredible possibility:

Random words might become correlated in advance of the big news event.

This breakthrough stands right next to the Dallas meme as far as importance in our ultimate mission here. So now it’s back to meeting time with the big brains once again. Although this is incredibly exciting, who’s got the time to piece all this together?!