Mission P1_12 was established to investigate some of the memes that developed from a rather unusual sequence of DreamBot runs. Six days ago, on 12/12, the NDC experienced a most weird degradation in the DreamBot to where it was working at only about 40-50% capacity. But despite that, the bot managed to pick up some clear memes at the Red Alert level: Jim + Christmas tree cutting/buying.

But that certainly wasn’t the reason for mission P1_12. Later in the evening on 12/12, the DreamBot self-corrected and another run was conducted that night. Strangely, the tree meme was almost completely gone, as those words were overtaken by other huge words, such as Jim, Fireworks, Apocalypse, Chain, and Blow. Two runs in one day with several different memes, and thus a special mission was born.

Also note that this sequence occurred just prior to the WAKE run, which clued us in that our old collection algorithm was dropping out extremely frequent words from having a chance at Red Alert status. Thus, you’ll notice that the surge scale scoring has changed since then, and the scale scores are much different. The new scale’s Red Alert level is now approximately 100, as opposed to the scale on 12/12, which looked for scores of about 5-7 points. This was a much needed change and also makes it easier to discern noise level words. Sorry for the break…now for your regularly scheduled update on Apocalypse…

Mission P1_12 received a few willing dreamers to help incubate what these bigger memes might mean as far as headlines in the near future, and so our goal in this article is to inspect those results to see if any clear predictions can be ascertained.

Dreamers were told to pick a word or meme that resonated with them and incubate a dream or two on the topic. They intended to know what that word or meme had to do with future events coming in the rest of December. If you’d like to see these all dreams in one consolidated list, simply navigate to the search form in the DreamBase (http://www.nationaldreamcenter.com/dreamdb/search/create_form/77 ) and scroll down to where it says “Mission # is any of…” and choose P1_12. If you do this, you’ll be able to see what the person actually intended and various other attributes.

In analyzing these dreams, I found a few overall memes, and here they are:

LEAVING: Undoubtedly the biggest overlap across most of the dreams was the theme of escaping or exiting or resigning or otherwise leaving a place or position. We had a government cabinet member stepping down, people leaving a burning city, a family escaping to the coastline, people trying to evacuate at an airport, and others.

FIRE: One dream specifically mentioned huge flames and fires. We also had FIREworks implied in the dreamer’s metaphoric declarations, and we also had a curious last name of Friar, which could either be a slurred Fire or someone Frying something, which is sort of a cooking type fire.

HOLES: Next, there were Holes in a couple of the dreams. Aneunayme dreamed about holes in the peoples’ blood vessels while Sherriann mentioned holes in the walls where they were hiding out. This could be a metaphor for Whole, but the context would be missing (i.e., Whole world? Whole country? Whole Foods?) My intuition suggests that this Hole meme is a deterioration of the veil, that infinitely thin membrane which separates the 3D reality from that which creates it. Every one of us experiences these holes one time or the other, and I’m thinking that these holes will become much more prominent, which dovetails very nicely into the alternative view of what Apocalypse means: http://www.etymonline.com/index.php?term=apocalypse

Its general sense in Middle English was “insight, vision; hallucination;” meaning “a cataclysmic event” is modern. As agent nouns, apocalypst (1829), apocalypt (1834), and apocalyptist (1835) have been tried.

With little direction about where all these topics might be taking us, I started to look at the locations in the dreams. They were all over the map, but there does seem to be some resemblance of order when we plot them out. We take the top emotionally charged dreams and plot them. Shadewolf’s Fire Strom is full of emotion, so it gets the #1 spot. This fire storm hits a big city, probably near Edmonton, so I map that. However, the family escapes to the West Coast, so I plot that as well.

The next emotionally charged dream was in an unknown governmental facility where aneunayme witnessed a team preventing/creating a virulent virus, which the dreamer ended up contracting apparently. I took the liberty of mapping this in Ft Detrick, Maryland, which was the center of the world for biological weapons. Now, it just so happens that Sherriann’s Hour Glass dream took place in or near New York City, which is dramatically close to the aforementioned location in the grand scheme of things.

(Update: And as of 10AM on 12/19, we also have another zombie apocalypse very similar to both dreams in that NY/Maryland area. This time, it’s Western Massachusetts: http://nationaldreamcenter.com/forum18/showthread.php?tid=467&pid=3156#pid3156. Thus, the source cluster gets stronger even.)

Then, as I was reaching for Edna’s dream, I noticed that the previous locations made a straight line toward probably the most spectacular Apocalypse of all….The Universal World Library.

Enter Edna’s awe-inspiring dream incubations. She was apparently shown a small city or village where the houses were all empty, and she was shown the “storerooms of all knowledge” and later “Welcome to the Universal World Library.” Unfortunately, she woke up before she could ascertain where she was, and I can imagine accidentally waking up from the sheer excitement of it all. Her first dream was here, but then she follows up with a second dream, where she’s told that this city exists under Alaska’s ice!

Here we have the whole picture plotted on a map. Line A starts at the mid-point between NYC and Ft Detrick and then plots straight through Edmonton. Then, I drew Line B which starts in the same place but is plotted through the West Coast location of where Shadewolf escaped. Now extend the two lines towards the northwest and notice that the cone covers the southern portion of Alaska. My hypothesis is that Edna’s World Library is located somewhere in this area, under a nice hefty layer of ice. I would actually like to see some sort of dream mission to find this world library, if enough people are interested to help out. 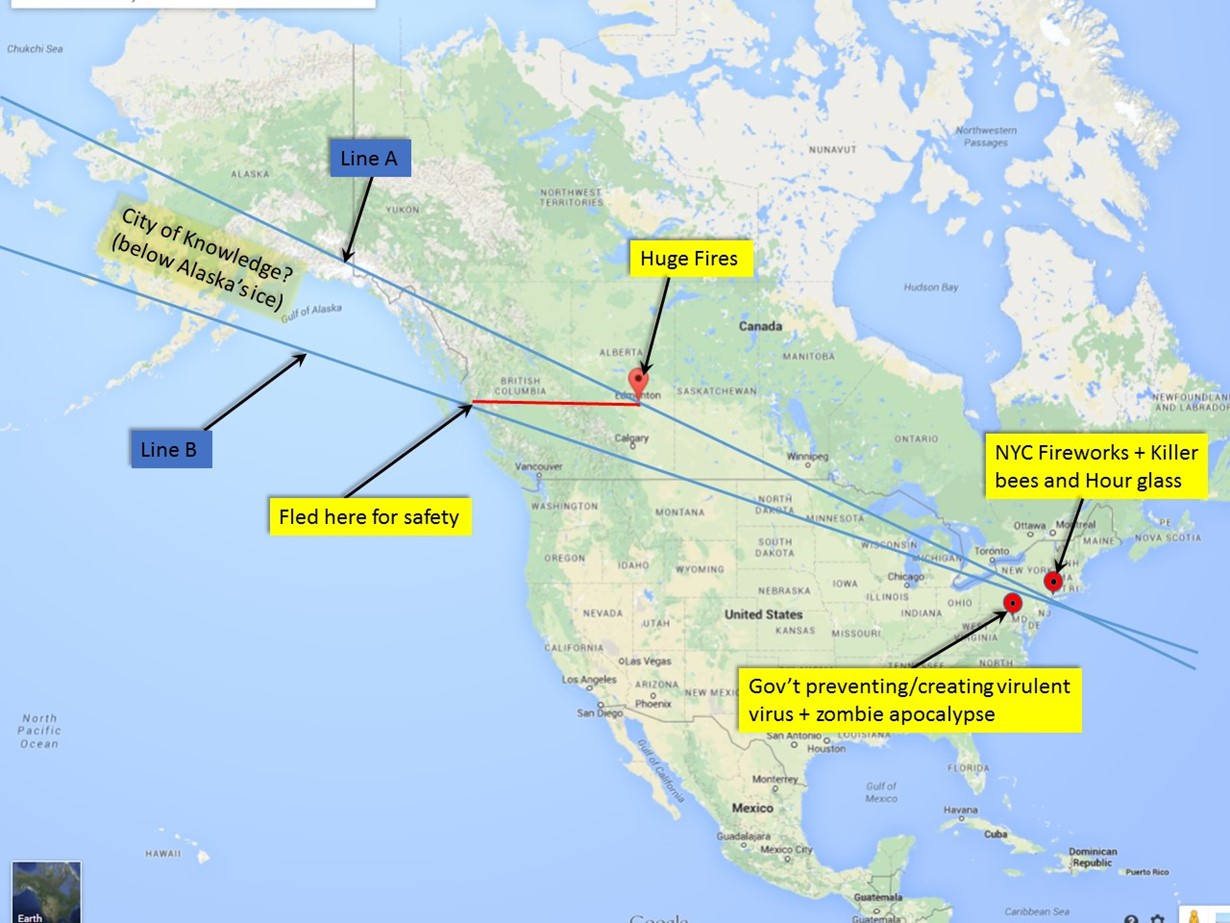 There are possible headlines from our material here, but nothing “feels” quite right as far as solidifying some concrete predictions. In accordance with DLP’s dream, some congressman or senator might step down, and his/her name might end in Alexander or James (or the name might begin with Alex / Jim). We also might see skycrapers engulfed in flames and/or a full burning city. We might see CharlieG’s dream come true in Southwest Asia, where a terrorist blast scares the crap out of everyone, making them scurry to evacuate the place. But for some strange reason, none of those options feel like high possibilities, and there isn’t a lot of overlap other than what I mentioned previously.

Therefore, I suggest something way out in left field. I suggest that the veil will continue to get punished, making more and more holes in the fabric of our reality. I suggest that more and more people will APPEAR to be going insane because they will be hearing more voices, seeing more “spirits” and entities, downloading knowledge, feeling the true peace despite the world falling apart….all these sorts of transpersonal experiences that are difficult to explain from the mainstream view of life.

And of course, how many headlines will come true about this? None. Just watch for it in your own experience at a personal level. Are you sure that reality is all concrete and the 5 senses are the most reliable sources of information? Or are weird things starting to take shape as if the paranormal actually starts feeling like the new norm? Yes, it could be that the New Earth or 5D or Ascension is here. OR it could be that new galactic energies are forcing permanent changes in the Earth’s electromagnetic field. I noticed that in addition to being grotesque, chaotic, and weird, Aneunayme’s dream involved humans growing to 9 feet tall. This can very well happen if the changing electromagnetic field alters the pressure systems around the globe. People will change in physical size. Plus, don’t forget that the Eastern traditions’ energy bodies are much bigger in size than the physical body. Thus we might have a connection to or a worry about the emotional or energy bodies instead of actual physical changes.

One last possibility is something that Sherriann already called very shortly after the Sony hacking began. She predicted, “Headline: December 20, 2014 – Another masked cyber attack on a large ​media ​corporation in the US is again blamed on an Asian country (N. Korea and/or China)​ relating to the movie “The Interview’ due to come out in theaters on December 24​.”

It seems as though her prediction of a second attack has already received a tickle, being that the perps warned of a “Christmas Surprise.” This is the kind of stuff you can enjoy ahead of time in the secret corners of the Forum….where the DreamForecasters hang out.

Okay, so anyway, since Apocalypse means to reveal, the collective might have been seeing this big hacking event coming for their so-called Christmas surprise. Sherriann saw it first, and then the collective picked up on it a couple of weeks hence.

Mission P1-12 isn’t officially closed, but right now, we have a mix of both versions of the Apocalypse supported by the incubated dreams. That is, we have both the world-ending sort of events and the disclosure-type events. In my humble opinion, I think Mission P1-12 was probably based on a big meme that predicted the coming Sony hack on or near Christmas. If the Christmas surprise ends up being a dud, then expect “the veil” to begin degrading as suggested previously, where life begins to be much more abnormal.

More dreams for P1-12 are certainly welcome; just be sure to leave a note in the P1-12 mission thread that there’s a new incubated dream. Let us know if you’re interesting in possibly searching for the hidden city of knowledge with us. If we have enough interest, we’ll begin a separate mission for it.

This blog entry will have a separate forum thread. Join the discussion, which is located here: http://nationaldreamcenter.com/forum18/showthread.php?tid=467